March 08, 2021
I cannot believe it's been almost a year since my last post, and two years since the beginning of this blog. Where have I been? At home, like most people, with work and children in online schooling and very little time for myself (and the blog). Time definitely IS a feminist issue as Helen Lewis eloquently writes in her book Difficult Women which I am reading right now (yes, at least a little bit of time to read!). Totally recommend it! By the way, let me brag: courtesy of my lovely partner as a Valentine's Day present! Yes, I am a DIFFICULT WOMAN , and proud to be! Wising you all a Happy International Women's Day on the notes of Bikini Kill's Rebel Girl (essential listening of every feminist out there)!
Post a comment
Read more

Work and life balance during a pandemic

April 24, 2020
The recent shutdowns imposed by many governments around the world to slow the spreading of covid-19 has redifined the notion of work and life balance. At least for those lucky enough to have jobs that can be performed from a computer on the kitchen table. And before I elaborate on that, my heart goes out to all the brave workers who still have to go out and put themselves and their family at higher risk of contagion, particularly health workers, people in social care, supermarket and shop staff, bin collectors etc. This pandemic has redefined many things, including the notion of what heroes do for a living. Finding balance Getting back to the theme of this blog, I am in that lucky group of people who have not lost their job or been furloughed and still are paid a full salary because their job can be done remotely. Some of us though have had to face new challenges and had to find a new work-life balance. While before those with children had to "worry" only about the holida
2 comments
Read more

March 08, 2020
A year ago I started this blog with an article on International Women's Day. To celebrate this anniversary and to honor all women around the world, I'd like to share a video based on a piece of writing by Camilla Rainville (also known as Furious Woman) called " Be a lady they said ". I had tears in my eyes when I watched it. I hope it will move you too. Click here to watch.
Post a comment
Read more 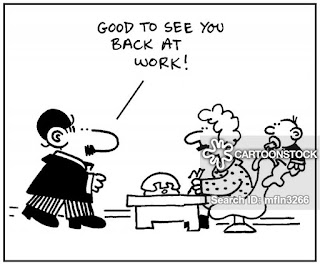 As promised a few months ago, this is the second part of my blog on motherhood and it relates to the dilemma known as work-life balance. As for the first post, this was prompted by conversations with friends/colleagues of mine on our group chat. In particular, one of my friends had a gorgeous baby back in October - she was the inspiration for the first post. Now that she is getting to the end of her statutory maternity she informed us on the chat that she had painfully come to the decision to request an unpaid leave of three months to be able to stay with her baby longer and be able to wean him before returning to work. A couple of us in the group were immediately ticked off by the word painfully and asked her for explanations. She told us that her project had several deadlines and she felt guilty (note this important keyword) that her colleagues had to take them on and cover for her, since her organization had not hired a maternity cover. It sounded like she felt it was her fault
Post a comment
Read more

October 05, 2019
I was not planning to write a blog entry on this topic right now but I found myself sharing my motherhood experiences with female colleagues and friends and it motivated me to write about it. From these conversations, I realised that my pregnant colleagues are mostly worried about two things: labour (how long and painful it’s going to be) and balancing work/career aspirations with raising children (also known as work and life balance). I usually do not give advice because I think it’s down to individual experiences and personal decisions. However I am always happy to share my experience as a working mother, in the hope that this can support other women on their journey. Myths about childbirth There are a lot of myths around the pain of labour (yes, I am sure Jeremy Corbyn can relate to that ;) ). Some are simply not true, others have an explanation. Is giving birth really painful? Should be considered as a medical emergency (in normal circumstances)? I can happily a
1 comment
Read more

Tales of Gender Bias in Science

Fairy tales   Have you come across a book called “Good night stories for rebel girls" ? It started as a crowd-funded initiative of two Italian writers , Elena Favilli and Francesca Cavalli ,  and it is now an acclaimed success of public and critics. I bought a copy for my children (the 12-year old daughter that you have already met and my 10-year old son, yes a book on rebel girls is highly recommended for young boys). The book is an anthology of biographies of amazing women narrated in the style of a fairy tale. “Once upon a time there was a girl named Ada who loved machines.” is the beginning of the tale of mathematician and computer scientist Ada Lovelace. And so on through the lives of well-known and less known remarkable women. I loved the book from day one. At the beginning of my journey into motherhood, I used to read the traditional fairy tales to my children but I would always alter the endings. For example, this was Cinderella’s alternative ending
1 comment
Read more 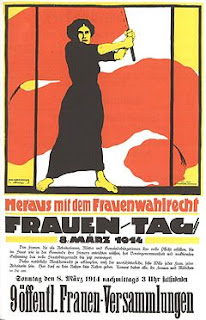 Poster for Women's Day in 1914. Source: Wikipedia. Back to the beginnings On Friday March 8, (some) people around the world will celebrate International Women's Day. This day was originally suggested in 1910 at the International Socialist Woman's Conference as a gathering to be held annually. The picture shows a poster for Frauen Tag in 1914 which demands women's right to vote. The t ranslation from German reads: "Give Us Women's Suffrage. Women's Day, March 8, 1914. Until now, prejudice and reactionary attitudes have denied full civic rights to women, who as, mothers, and citizens wholly fulfil their duty, who must pay their taxes to the state as well as the municipality. Fighting for this natural human right must be the firm, unwavering intention of every woman, every female worker. In this, no pause for rest, no respite is allowed. Come all, you women and girls, to the 9th public women's assembly on Sunday, March 8, 1914, at 3 pm."
2 comments
Read more
More posts

thewomanscientific
Hello, I am a senior scientist at a reputable operational centre called the European Centre for Medium-Range Weather Forecasts based in Reading, UK. I work in aerosol data assimilation which is a fancy way to say that I use observations (mostly from satellites) and numerical models to improve the prediction of pollutants in the atmosphere. I am also very interested in the challenges that women face when working in professions that are prevalent "male". This blog is about my personal views on women and science, and women and life in general. I hope you enjoy it. At this point I need to add that the views represented in this blog are mine alone and do not represent the organization I work for. Thanks for following!